1. What was the reason behind the project?
Water leakage has been occurring for years through the building envelope which was damaging decorative historic plaster. Additionally, during WJE’s investigation, distressed limestone units were found in many areas of the ziggurat resulting from corroded mild steel anchors. The project addresses the water leakage and distressed limestone units. 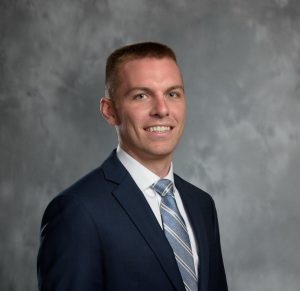 2. What are some of the costing-saving and aesthetic choices your contractors have made to help this intricate project be successful?
The contractor (Structural Preservation Systems) came up with a unique and efficient plan to access and phase the work without using a crane on site. This plan included removing and storing stone on the ziggurat of the memorial in lieu of storing the stone at grade. The contractor also hired a structural engineer to confirm that the ziggurat structure would not be overloaded by the stored stone. Additionally, through careful and methodical deconstruction, the contractor was able to salvage many stone units which decreased the amount of replacement stone needed for the project.

3. You’ve mentioned that the Indiana War Memorial project is one of your “bucket list” projects. Why?
For two reasons. 1) the building serves as a significant and reverent memorial to our Hoosier veterans who sacrificed for our country. 2) It is one of the most iconic historic buildings in Indianapolis. Being a native to Indianapolis, I take great joy in the opportunity to preserve this significant part of our Indiana culture.

4. What is/was the most challenging aspect of the project?
Without a doubt the challenge of this project is the access to the work. As you can imagine, at 210 feet above grade, maneuvering stone units which weigh up to 1700 pounds and setting them in position within fractions of an inch is a tall order. Luckily, the project team is up for the challenge.

5. You’ve developed a Challenge Coin for stakeholders involved in this project. Can you briefly explain what a Challenge Coin is and why you wanted to create one for this project?
Challenge coins are a military tradition which some say dates back to the roman empire.  They are commonly presented to individuals in recognition of an important or significant achievement. As a civilian and member of FEMA’s Indiana Task Force 1, I received my first challenge coin at the conclusion a joint training between FEMA, the Army Corp of Engineers, and an Army unit based out of Camp Atterbury. Given the significance of this repair project and considering the memorial and its purpose and military connection, we commissioned the creation of a challenge coin for this repair project to present to individuals who have made significant contributions to the project. By Brandon Raymer How much do you know about the Hoosier Hero who chose the heavy...