By: admin On: May 08, 2019 Artifacts & Attractions, Stories of Service No Comments How much do you know about the Hoosier Hero who chose the heavy cruiser USS Indianapolis as his flagship, commanded U.S. naval forces during two of the most significant naval battles of WWII, and would go on to succeed Admiral Nimitz as Commander in Chief, US Pacific Fleet? Raymond Ames Spruance, originally from Baltimore, was raised in Indianapolis and graduated from Shortridge High School. He attended the US Naval Academy and rose to the rank of Rear Admiral. In May of 1942, two days before American forces were to depart Pearl Harbor towards Midway Island, Admiral Spruance replaced Admiral William F. Halsey, Jr., who was in the hospital stricken with shingles. Spruance was put in command of Task Force 16, which included two carriers: USS Enterprise and USS Hornet, and was instrumental in the decisive US victory in the Battle of Midway.

When Midway began on June 4, 1942 the first few waves of U.S. aircraft were greatly outnumbered by Japanese forces. Under Spruance’s command, bombers from USS Enterprise located and sunk three Japanese carriers, significantly changing the outcome of the battle, which most historians agree was a turning point in the war. Official Navy historian Samuel Eliot Morison characterized Spruance’s performance at Midway as “superb,” and said that he “emerged from this battle one of the greatest admirals in American naval history.”

So why don’t we know much about Admiral Spruance? Spruance was described as a simple and calculated man, an “Admiral’s admiral.” He was modest and kept his feelings and private life to himself.  To learn more about this Hoosier hero, visit the room named in his honor within the Indiana War Memorial. The Branches of the US Military are extremely important to our history and to every... 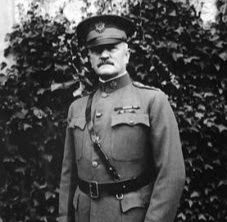 A brief history of the highest decorated U.S. General and the auditorium that still...