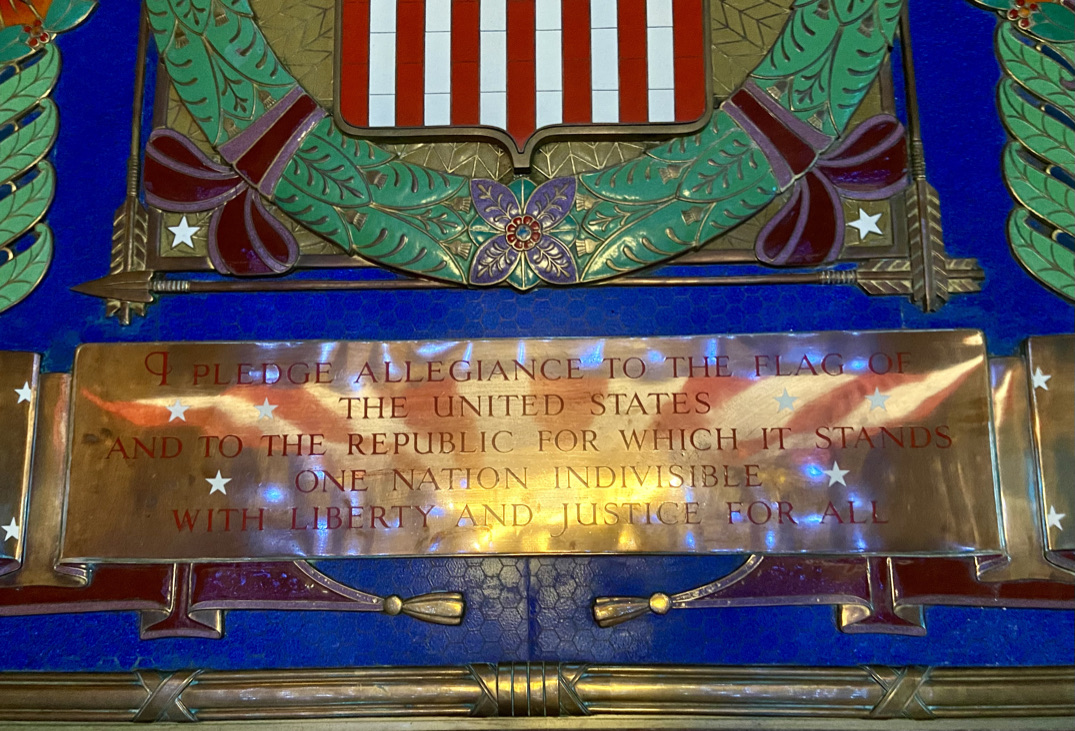 Few people have visited the Shrine Room, the second story that floats atop the Indiana War Memorial.  At its center, the Altar of Consecration is a place to reverently call to memory the fallen soldiers of World War I and quietly ignites our sense of patriotism and gratitude for our freedoms. When you visit, you’ll notice the Pledge of Allegiance inscribed along the south side of the Altar:

“I pledge allegiance to the flag of the United States, and to the republic for which it stands, one nation, indivisible, with liberty and justice for all.”

In case you missed it, there are words missing from the pledge inscribed there. Today, many people know and can recite the words of the Pledge, but perhaps know little about its origin and how it has changed since its inception.

The Pledge of Allegiance was written for the magazine “Youth’s Companion” in the late 1800s by American Socialist Minister Francis Bellamy. Bellamy was asked to craft the new pledge as a patriotic code to the celebration of the 400th anniversary of Christopher Columbus’s arrival in the New World. It was originally published on September 8, 1892. It read:

“I pledge allegiance to my Flag and the Republic for which it stands, one nation, indivisible, with liberty and justice for all.”

Throughout the next century the Pledge of Allegiance was revised to reflect the Pledge recited today.

In 1923 the National Flag Conference edited the Pledge of Allegiance, adding “the Flag of the United States” so that it read as:

“I pledge allegiance to the flag of the United States and to the Republic for which it stands, one nation, indivisible, with liberty and justice for all.”

Nineteen years later, in 1942, Congress officially adopted the Pledge of Allegiance and stated it should be recited with the right hand over the heart. Prior to this, the reciting of the Pledge included the “Bellamy Salute” – extending the right arm toward the flag with one’s hand outstretched. With the rise of fascism in Europe and the use of the Nazi salute—which closely resembled the Bellamy Salute—the transition to placing the right hand over one’s heart was an easy one.

In 1954, the words “Under God” were added in response to the Cold War. President Dwight D. Eisenhower encouraged Congress to add the two words in a response to the threat of Communism during these times. The original intent of the Founding Fathers was to have “one Nation under God”, a statement that is proclaimed in the current version of the Pledge of Allegiance:

“I pledge allegiance to the flag of the United States of America and to the Republic for which it stands, one Nation under God, indivisible, with liberty and justice for all.”

We are one Nation under God – a single nation, consisting of the blend of spiritual heritage encompassing the Constitutional-decree of freedom, as intended by the Founding Fathers, as stated in the Pledge of Allegiance.  In the original writing there is no comma between one nation and under God.

Today, Americans are quite familiar with the Pledge of Allegiance—having recited it time and time again – in schools and at events – so often it is easy for the words to lose their meaning. In a famous skit in 1969, Vincennes, Indiana native, Red Skelton went into great detail breaking down the Pledge of Allegiance. Skelton reiterates the words of his teacher from the Harrison School, creating distinction for each individual word of the Pledge of Allegiance. It’s as American as apple pie—in how it transforms the Pledge into all of the reasons we honor the sacrifices made by so many that make Hoosiers so proud to call America the Home of the Free and Land of the Brave. The Pledge calls us to recognize our freedoms and honor the sacrifices that have been made by many, allowing us to be one nation under God – with liberty and justice for all. This May the Indiana War Memorials Foundation is honoring Veterans during Military... Thank you to all of our supporters this year!  If you are interested in still giving,...