Most of us vividly remember the exact moment, nearly 20 years ago, when we learned about the terrorist attacks on the World Trade Center and the Pentagon.

Greg Hess had just walked in from a shift at the fire department. His dad called and told him to turn on the TV. Right before his eyes, he watched silently as the second tower was hit.

Just 16 hours later, he was at Ground Zero.

“We were one of the first FEMA teams to arrive,” Hess recalls. “Thirty minutes out from New York City, we saw the smoke. It was surreal. The bus went silent.”

Fittingly, Don Henley’s ‘The End of the Innocence’ was playing on the bus sound system.

Hess and Indiana Task Force-1 spent the next eight days in lower Manhattan. Those eight days, Hess says, changed every day after that.

“It changed my life forever,” he says. “I can’t really describe what Ground Zero was like. But it’s stayed with me. And I’ve watched my friends get sick—and some of them die—as a result of their exposure at Ground Zero.” 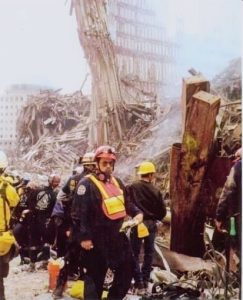 Hess says 26 of the 62 Indiana Task Force-1 members have some sort of medical condition or illness as a result of exposure—and four lost their battles. Hess himself was diagnosed with cancer in 2007. Despite the life-altering impact of 9/11—or maybe because of it—Hess continued his career as a paramedic and firefighter. In fact, he celebrates 40 years of service in 2021.

But 9/11 is always with him. That’s why, in 2010 when the artifacts from Ground Zero were available for communities to create permanent local memorials, he spearheaded an effort to acquire artifacts for a memorial in downtown Indianapolis. With support of local civic leaders, he was able to secure two steel beams from the World Trade Center.  These two steel beams form the centerpiece of the Indiana 9/11 Memorial that stands as a remembrance of those horrific events and—more importantly—those Hoosiers who lost their lives because of it.

In April 2011, Hess traveled to New York to personally bring the support beams home. The beams—draped with an American flag– were delivered to Indianapolis. During the last leg of the journey, an Indiana State Police escort led a procession of more than 11,000 people, many on motorcycles, which spanned nearly 50 miles.

The memorial was dedicated on the 10th anniversary in memory of those who perished. Renamed the Indiana 9/11 Memorial, it includes the two World Trade Center beams, granite monuments with inscriptions detailing the timeline of the tragic events, and a life-size bronze sculpture of an American Bald Eagle. That eagle—with outstretched wings to represent the American spirit and resolve—is Hess’ favorite part of the memorial.

“The eagle looks east toward New York City, Washington, D.C. and the crash site of Flight 93 near Shanksville, Pennsylvania. It’s like it’s saying, ‘I got this.’ It gives me chills every time I look at it atop the beams,” he shares.

Expanding Our Honor with the Memorial

He believes it’s important for Indiana and other states to have 9/11 memorials. Even though events didn’t happen in our state, 9/11 affected everyone across the United States. Civilians, first responders and then the military were all impacted—with thousands upon thousands of lives lost.

It’s also why he’s pleased to see the memorial expanded to include military service members. Following the attacks on 9/11, nearly 7,000 service men and women have paid the ultimate sacrifice in the War on Terror. The expansion of the memorial includes:

The expanded Indiana 9/11 Memorial will be dedicated this Sept. 11, 2021—the 20th anniversary. And Hess plans to be there.

“The military played and continues to play an important role in keeping us safe,” he says. “Many have lost their lives protecting us, so it’s only appropriate that we remember their sacrifice, too.”

Join Us for 20th Anniversary

As you mark the 20th anniversary of 9/11, we hope you’ll consider a visit to the Indiana 9/11 Memorial as part of your remembrance.

“It’s an opportunity to see and touch a piece of history,” Hess says.

Even more, it’s an opportunity to remember, reflect and bear witness to the American resolve and resilience during difficult times—a reminder that’s valuable any time of the year. 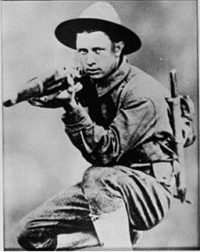 U.S. Declares War on Germany   The early days of World War I lit a fire throughout... The Indiana Gold Star Families Memorial Monument will commemorate the valor and sacrifice...
← Meet Jennifer Watson the Indiana War Memorials Collections Manager
Circle of Lights: Meet the crew from the IBEW 481 who bring holiday magic to Indianapolis every year! →