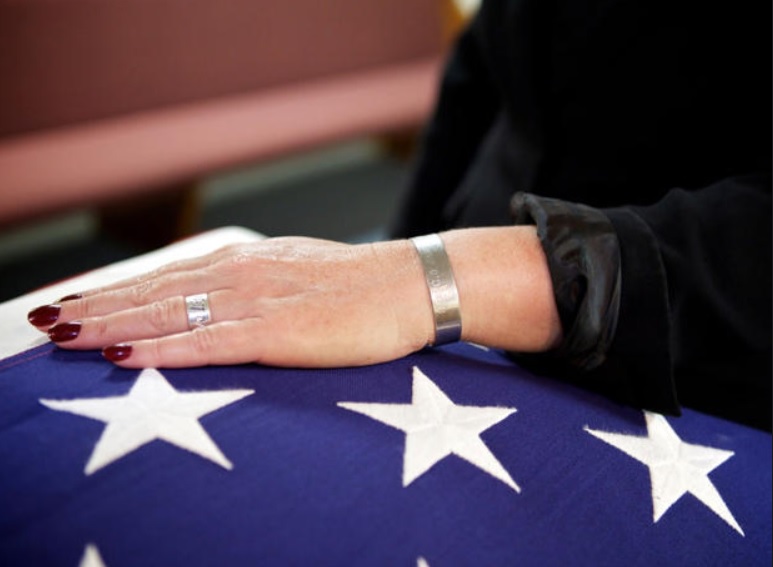 Kathy Strong has a very special way to honor Spec. 5 James Leslie Moreland, a Green Beret who went Missing in Action on 2/7/68, during the Vietnam War. Here are Five Questions with Kathy, outlining her 47-year vigil to honor James and her current mission to place a Brick of Honor for James in all 50 states.

1) Why James?
I received James’ POW/MIA bracelet in my Christmas stocking on December 25, 1972, and promised on that day I would wear his bracelet until he returned home from Vietnam.  When I received the bracelet, MIA/POW bracelets were extremely popular. I always pictured that I was going to meet James at the airport and put the bracelet on his arm to welcome him home. But that wasn’t meant to be.

2)  How did you feel when you received James’ bracelet?
I felt like my promise to him really meant something.  It was a pact between God, James, and me.  I wanted to do my part in supporting James and his family.  I thought it must be heartbreaking not to know what happened to their son and brother. I felt like wearing his bracelet would somehow help make him feel loved when he came home.

3) How did you honor James and what is your current plan to remember James’ sacrifice?
Once I put James’ bracelet on, I never took it off – not even during an MRI!  In the beginning, I had no idea that it would take over 38 years for James to return home. I was able to return his bracelet to him on 5/14/11, by burying it with his remains, but my promise to remember his service has not ended.  I am currently on a mission to honor James with a memorial brick in all 50 states.

4)  How many states currently have a permanent reminder of James’ service?
Indiana will be the 20th state with a Brick of Honor to remember James. My 17th state was Wisconsin (Milwaukee) on Memorial Day 2019. Right after the ceremony, I was able to travel to Indianapolis to pick out a location for James’ brick on Monument Circle. I was so excited that his brick will be placed right next to Elvis Presley’s brick.

5) Why did you select Indiana?
I found the IWM Brick of Honor program online and thought it was a perfect way to honor James. I’ve been to Indiana several times in my lifetime (beginning in 1987) and have so many wonderful memories there!  I’m excited to visit September 19-20 to attend the National MIA/POW ceremony and be a part of a small ceremony dedicating James’ brick on Monument Circle. The Indiana War Memorial’s Shoup Hall was named to recognize the service of... Thank you to all of our supporters this year!  If you are interested in still giving,...
← Lt. Col. Joseph Ward’s Mark on History
Shining A Light Premieres on Veterans Day Weekend 2019 →