General David Monroe Shoup was born on December 30, 1904 in Battle Ground, Indiana. In 1926, he graduated from DePauw University, in Greencastle, Indiana, where he was a member of the ROTC. He was commissioned a 2nd Lieutenant in the US Marine Corps, on July 20, 1926. 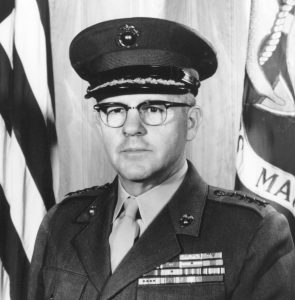 After completing Marine Officers Basic School at Philadelphia Navy Yard, Shoup joined the 6th Marine Regiment on expeditionary duty in Tientsin, China, in 1927. In 1928, he served at Quantico, Virginia, Pensacola, Florida, and San Diego, California. From June 1929-September 1931, he was assigned to the Marine detachment aboard the battleship USS Maryland. He then served as a company officer at the Marine Corps Base, San Diego, until May 1932, when he was ordered to the Puget Sound Navy Yard, Washington. He was promoted to 1st Lieutenant in June 1932. He served on temporary duty with the Civilian Conservation Corps in Idaho and New Jersey from June 1933-May 1934. He was again ordered to China in November 1934, serving with the 4th Marine Regiment in Shanghai, and then at the American Legation in Peking. In June 1936, he returned to Puget Sound, and was promoted to Captain in October. He completed the Marine Corps Junior Course, Quantico between July 1937-May 1938, after which he served as an instructor. In June 1940, he rejoined the 6th Marines in San Diego. He was promoted to Major in April 1941.

In May 1941, Shoup was ordered to Iceland with the 6th Marines and, after serving as Regimental Operations Officer, became Operations Officer of the 1st Marine Brigade in October. For his service in Iceland during the first three months of World War II, he was awarded the Letter of Commendation with Commendation Ribbon. He assumed command of the 2nd Battalion, 6th Marine Regiment, in February 1942. In March, he returned with his battalion to San Diego. In July, he became Assistant Operations and Training Officer of the 2nd Marine Division. He was promoted to Lieutenant Colonel in August, and in September was sent to Wellington, New Zealand, where he served as Operations and Training Officer of the 2nd Marine Division until November 1943. His role in planning the assault on Tarawa earned him his first Legion of Merit with Combat “V”. He also served as an observer with the 1st Marine Division on Guadalcanal in October 1942 and with the US Army’s 43rd Infantry Division on Rendova, New Georgia, in summer 1943, where he earned a Purple Heart.

On November 9, 1943, Shoup was promoted to Colonel and placed in command of the 2nd Marine Regiment, 2nd Mariner Division, the spearhead of the amphibious assault on Tarawa in the Gilbert Islands, which began on November 20. Soon after landing, Shoup was wounded in the leg by shrapnel from an exploding enemy shell, but managed to rally his Marines, who were stranded a half mile from their landing point, and lead them across the reefs under heavy fire. Reaching the beach, he assumed command of all the Marines who had made it ashore, but were pinned down by artillery, machine gun, and rifle fire from Japanese shore emplacements. Shoup, again risking his life, personally led the charge up the beach onto the heavily fortified island. During the next two days, he led repeated attacks against the fanatically defended Japanese positions under constant enemy fire. By November 22, the Marines has seized control of the island. For his heroism and brilliant leadership during this action, he received the Medal of Honor, the nation’s highest award, on January 22, 1945, from Secretary of the Navy James V. Forrestal. He was also awarded a second Purple Heart.

In December 1943, he became Chief of Staff of the 2nd Marine Division, and served in the battles of Saipan and Tinian in the Mariana Islands from June-August 1944, for which he was again awarded the Legion of Merit with Combat “V”. In October 1944, he returned to the US as Logistics Officer, Division of Plans and Policies, Headquarters Marine Corps. In summer 1947, he became Commanding Officer, Service Command, Fleet Marine Force, Pacific.

In June 1949, Shoup became Chief of Staff of the 1st Marine Division at Camp Pendleton. He was then transferred to Quantico, where he served as a Commanding Officer of the Basic School from July 1950-April 1952. In 1953, he was promoted to Brigadier General, and served as Assistant Fiscal Director and then Fiscal director of the Marine Corps. He was promoted to Major General in September 1955. From May 1956-May 1957, he served as Inspector General for Recruit Training and then Inspector General of the Marine Corps. He returned to Camp Pendleton in June 1957 as Commander of the 1st Marine Division. In March 1958, he became Commander of the 3rd Marine Division on Okinawa. He then served as Commanding General of the Marine Corps Recruit Depot, Parris Island, from May to October 1959. In November 1959, he was promoted to Lieutenant General and appointed Chief of Staff, Headquarters Marine Corps.

Shoup was appointed the 22nd Commander of the Marine Corps by President Dwight D. Eisenhower on January 1, 1960, and promoted to General. He retired from active service on December 31, 1963. On January 21, 1964, he was awarded the Distinguished Service Medal by President Lyndon B. Johnson for exceptionally meritorious service as Commandant of the Marine Corps. Shoup died on January 13, 1983, and was buried in Arlington National Cemetery.

We hope you will visit the Indiana War Memorial to learn more about David M. Shoup and other Hoosier veterans.